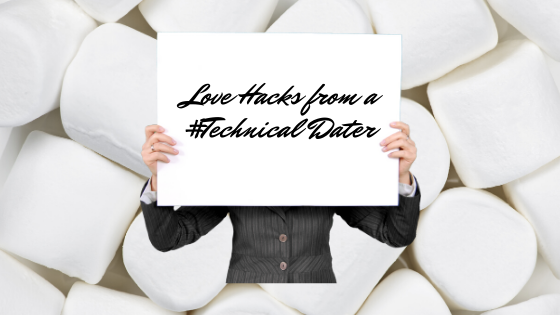 #TechnicalDater offers pro tips on finding the love of your life

Confessions of a technical dater

Okay, u may ask what actions define a technical dater and I will very happily elaborate below, but first I would like to share the hows and whys related to my forensic approach to dating.

I came from a family where most every relative was married in their teens, pushing a baby carriage in their teens (most-times the latter preceded the former) & roughly half of them were signing divorce papers in their 20’s.

How could this be, you may ask.  I grew up on a virtual compound devoid of social and cultural entertainment options.  Heck-there wasn’t even cable TV.  So, well, er-u can guess what everyone was doing for fun.

This had me pretty nervous about my fate and I decided to make a strong plan to reduce the likelihood that this destiny was contagious.

So I became a technical dater.

Definition: One who does not date recreationally.  Potential dates are pre-screened carefully to reduce wasted time and carefully cross examined upon the first engagement, which must be time defined and brief in nature and allow the chance for daylight examination of the candidate in a mutually agreed upon public place.  Yeah- I was what some might describe as a controlling bitch…(spoiler alert-still am).

I really never understood recreational dating in the first place.  My grandmother made me date some child who was interested in me whilst I was busy shamelessly whooping her 65 year old bowler’s butt.  This “child” was 19 years old.  I was 17.  He took me to the beach.  Plunked me down and went off with his guy friends to get some sucker to buy them beer.  That was not my thing so I watched in horror as his idea of showing off was chucking a rock at a streetlamp to break the glass.   I told him the date was over and paid around $100 (when that meant something) to take a taxi to my suburban home.

The result: No more “hey, you’re cute do u wanna go out” nonsense for me.  I started doing old school tinder dating (which was letters and photos mailed to po boxes) and when my dating pool wasn’t big enough for my picky tastes-I started my own dating company at the age of 21.  Selective Singles.  Of course I skimmed the cream for my friends and myself.  Yes, haven’t I already established that I am horrible?

Anyhow, after dating a few trillion times, I had the thing down to a science and my list of wants became very specific.  I realized I fit best with a man who would never question a woman’s strength, so I needed a non-mommy’s boy who was raised by an independent woman.  Probably divorced.  Probably he would be a youngest or an only child or at the least, the only boy in the family.  Yup-stuff like that meant that there was a 10% or less chance that there would even be a date…but at the end of a decade, I had dated about that percentage of North America.

My other musts were much less like CV items.  It was finding a man with a sense of self.  Somebody who did not need to fit in and could form his own opinions based on facts and retain an open mind to revisiting those beliefs if a good debate could persuade him to think otherwise.  Now that is where the air becomes really thin.

Once I had a live one on the hook, I waited for ten dates to have sex.  Two reasons for this: I didn’t want to waste time with the wrong person just because we had a physical connection.  Secondly, why the HECK would anyone voluntarily surrender the amazing anticipatory euphoria that comes during this time of waiting?  I mean why trade a sparkler for a firework show due to impatience?  Too, this was my defacto #marshmallowexperiment.  If u don’t know what that is, please google it…it is VERY important to find a mate with impulse control.

Now, not everyone is going to be interested in the things that I valued and some may find enjoyment in dating and having dalliances with virtual strangers…but for my money, I always had much more fun with familiar friends in shared activities & re the latter, I could always sate my own appetite.

I have another blog on this that goes into greater detail: https://coafse.com/passions for anyone seeking to crawl further down the rabbit hole with me.  So, if u care about finding your best friend, you’re gonna have to spend a little more time on this goal than u do in the manicurist’s chair…but having a strong filter and not getting stuck is a giant time hack.

As with every goal.  Usually the end result becomes secondary to the changes that u see in yourself whilst u r striving towards it.  U will learn what u like in a potential mate.  U will learn that the truth can be delivered in a kind way and it is always the best policy…& so much more.